This substance plays an extremely essential role in treating chronic pain among patients. When a person encounters a traumatic injury or when someone experiences pain after surgery, physicians prescribe this substance as a means to alleviate pain. Even among cancer patients, this is prescribed because if the pain is left unattended, long-term risks will occur.

But what makes it so bad after all? The thing is, it is medically essential that it has to be given as a medication despite the life-threatening risk it offers.

It was in the late 1990s when the substance was introduced in the medical industry as a safe and effective medication, and this has resulted in rampant prescriptions to several patients. As time progressed, the surge of addiction in the country suddenly increased until it became a national health crisis.

Compared to other drug fatalities, addiction to these painkillers occupy more than 60% of the total drug deaths in the country, and what is more concerning is the idea that a huge part of this number is medically prescribed. As soon as patients realize they have experienced drug dependence, they either suffer from withdrawal or resort to illicit use.

This epidemic has significantly affected the country’s economy as the cost of the response to the crisis reaches more than $75 billion each year. The government has been providing a great amount of healthcare and treatment to addiction as well as dealing with increased lost productivity and crime rate related to substance abuse.

How Serious Is This Addiction Problem 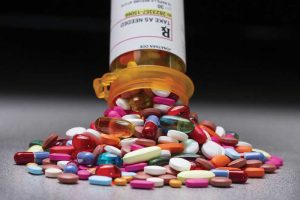 More than two million people in the United States of America have been diagnosed with an addiction to this substance. This proves that the substance, despite the depth of its medical relevance, is highly addictive and extremely vulnerable to misuse. The rate of overdose deaths and emergency admissions due to substance abuse remains significantly high.

The country has been battling this crisis for more than a decade already yet it continues to affect a huge number of the population in the US. Despite classifying these as controlled drugs, more than ten million Americans in 2019 have been reported to be misusing the substance and the age ranges from as young as 12 years old.

What makes this more alarming is the birth of newborns with withdrawal symptoms caused by addiction during pregnancy. Prescription of this substance among pregnant women (or even lactating mothers) is crucial as it could lead to preterm delivery and stillbirth. However, this prescription is also necessary when the mother is under addiction treatment.

The human body releases endorphins which interact with the receptors of the brain and allows the person to cope with stress and feelings of pain. These chemicals regulate the production of dopamine, also known as the happy hormones as it is responsible for igniting feelings of pleasure.

Whether natural or synthetic, this compound stimulates the increased production of endorphins to numb the body from chronic pain. This is the reason why it works effectively as a painkiller. However, as the amount of endorphins increases, the body experiences a sense of euphoria, a feeling of bliss or pleasure, which can also be a sign of high.

As soon as the high subsides, feelings of dissatisfaction and loneliness transfer. As a result, the person begins to crave more of the substance. The tendency for the body to establish tolerance to the drug also happens. And this is when the cycle of addiction begins. If you stop the intake, you will experience withdrawal, and if you continue, you will seek more.

Substance addiction is a never-ending habit that can only be overcome with the help of professional treatment. Addiction is also considered a chronic disease that needs to be treated right away or else, a person’s entire wellbeing becomes negatively affected – be it physical, emotional, behavioral, or social aspect.

Side Effects of Narcotic Use

These highly addictive painkillers can be administered safely when a physician’s prescription is strictly followed. Crushing and snorting this narcotic is the usual doings of people addicted to it. Some would also use these drugs in conjunction with other substances. This is when the risk of overdose becomes prominent.

A person shows signs of overdose when difficulty breathing is experienced or when the pulse slows or becomes erratic. Loss of consciousness is also a sign of danger. Other things to watch out for include delirium, low blood pressure, loss of strength, extreme vomiting, blue or purple lips and fingertips, pinpoint pupils, and inability to talk.

As soon as a person shows signs of overdose, it is best to bring them to the hospital right away. For urgent conditions, Naloxone can be administered safely by non-medical individuals as a form of first aid for overdose. The majority of narcotics-related deaths are caused by drug overdose, which   is why medical attention should be provided right away.

Apart from addiction and overdose, the body may also experience physical discomfort while under substance medication. This includes sleepiness, nausea, constipation, and slowed breathing. It is best to always speak with the physician about how one’s body reacts to the substance so that it can be given a remedy right away.

Heroin, a non-medical substance, is considered one of the five most abused drugs in the country. It is made from a chemical extracted from an opium poppy plant. When people are no longer satisfied with prescription painkillers, they feed their addiction with a stronger substance, heroin.

Fentanyl, a synthetic painkiller, is known to be twice as potent as morphine. This is mainly prescribed to patients who experience severe pain. When patients have become tolerant to other painkillers, Fentanyl is prescribed to manage the pain. This drug is prone to abuse and can highly trigger an overdose.

These are already powerful substances and sometimes, people use them in combination with other drugs just to satisfy the craving for euphoria. The black market also offers prescription painkillers that are mixed with a bit of heroin or fentanyl and that is a really dangerous thing.