10 Tips In Going To Your First AA Meeting

Do you have a drinking problem? You might be considering breaking the bad habit. But quitting alcohol is not easy, especially if you try to do it on your own.

Getting help is the best option. For alcohol addiction, you can go through rehab, but this would cost you a lot. If you’re looking for a more budget-friendly option, Alcoholics Anonymous (AA) is a good place to start. It’s a support group where people struggling with alcoholism meet and encourage each other to live sober lifestyles.

AA is a group that uses the so-called 12-step method. It is a faith-based organization that emphasizes the role of a higher power in bringing about change in your life.

At first, attending your first AA meeting may not be a comfortable experience. But that’s normal. Don’t let it discourage you. To help you further, here are ten tips to make the most out of that first meeting.

Don’t worry if you’re new. Everyone started that way. 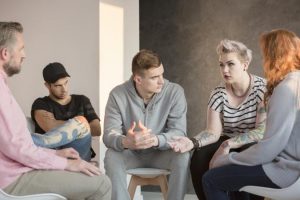 The biggest worry you may have is that you’re new to the group. You could be thinking that you’ll feel left out. And once people start talking, you may have absolutely no idea what they’re talking about – like the Big Book, the 12 steps, and the like.

But that’s fine. Everyone who is in your AA group started out like you, too. Everyone had to learn the ropes along the way. So, if you’re still new to everything, don’t worry. No one will judge you.

Instead, they will help you understand how the group works. Recovery is a team effort in AA, so you can expect others to lend you a hand.

The only thing you need is the desire to stop drinking.

You don’t have to belong to a certain religious group to become part of AA. In fact, you don’t strictly have to believe in God. Although AA is a faith-based organization, it is open to anyone who wants to overcome alcoholism. Other members will still welcome you into the group as if you’re one of them (because you are).

There are also no other stringent requirements to get into AA. As long as you want to leave drinking behind and live a sober life, you can join in.

You don’t even have to pay a fee, as AA groups are free of charge. Your only expense is transportation to and from the meeting place.

Introduce yourself to the facilitator.

For this to work, you have to show up a bit early. Then, talk to the meeting head or moderator. Let him know that it’s your first time to attend an AA meeting. In turn, he can give you a warm welcome and even introduce you to members who have been there for a while. Together, they will help you get comfortable with your first meeting.

Also, introduce yourself to other members after the meeting. With that, you can strengthen your support system.

Focus on what you have in common with other members. 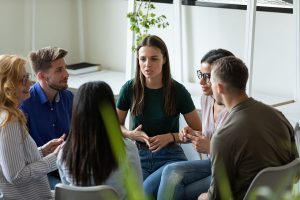 Not all members share the exact same experiences with you. And that’s normal. Thing is, you may not be able to relate to everything that other members share. In turn, if you focus more on these differences, chances are you would feel out of place.

Instead, focus on what you have in common with your fellow group members. Never mind the differences. After all, you’re on this journey to sobriety together.

Also, as you attend more meetings, you’ll realize that some members have stories similar to yours, and others have experiences like those that happened to you too.

Don’t talk over other people.

During the meeting, the facilitator would encourage everyone to share their stories. If you’re the type who loves to talk, you could have that urge to comment on everything your fellow members share. Whatever you do, do not interrupt anyone who is speaking. This is known as “crosstalk,” which is a no-no in any AA meeting.

Also, you’re not allowed to offer advice to other members or to express strong opinions about their lives. Let the facilitator handle that part. Focus on listening to others and sharing your own story when it’s your turn.

You don’t have to share something in your first meeting.

If you’re the shy type, you are not obliged to share anything during your first meeting. Not feeling comfortable to bare your life over to people you’ve just met? No problem. No one will force you to share during your first time. Instead, just listen to what everyone else is sharing.

Listen well to what others say.

In AA, one of your goals is to learn from the experiences of fellow alcohol addicts. The best way to achieve this is to listen to your fellow members’ stories. Avoid spacing out or fiddling with your phone during the meeting. Instead, always pay close attention when someone else is speaking.

Some people have a bad habit of coming in late and leaving early. Don’t do that – you will miss out on important parts of the meeting. Especially if it’s your first time attending, it will leave an unpleasant first impression on you.

Always come on time. It’s also a sign that you respect other people’s time, just as you would in meetings at work.

Don’t let talks about God put you off. 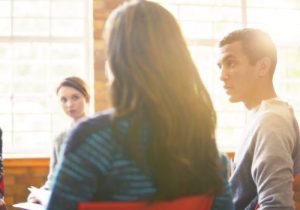 If you happen to be an atheist or agnostic, talks about God may turn you off. This is normal in meetings, as AA is a faith-based organization. But AA is not actually affiliated with any particular religion, and most groups would define God as a “higher power.”

For non-believers, they can make the group itself be that higher power. In fact, a lot of atheists actually have benefitted from 12-step programs like AA.

Go for coffee with other members after the meeting.

AA members often go for coffee after the meetings. If it’s your first time, you can join them as well. It’s a great way to get extra support. Plus, you’ll discover a great way to socialize without alcohol.